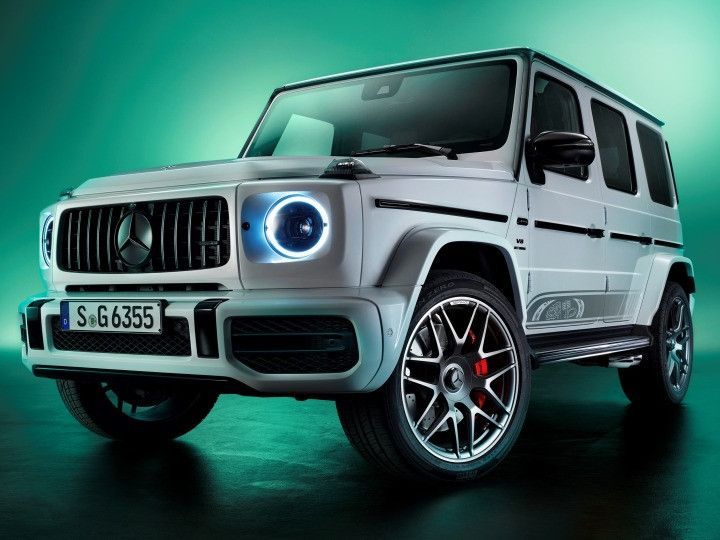 Mercedes-Benz has premiered a new AMG G 63 ‘Edition 55’ SUV on the 55th anniversary of its performance arm, AMG. The special-edition SUV gets new interior and exterior features to differentiate itself from the top-spec G-Class. It’ll be available to order globally until October.

You can get the Mercedes-AMG G 63 Edition 55 in two colours – obsidian black metallic and opalite white. The special edition SUV features ‘Edition 55’ decals below the doors on both sides. In addition, it gets special 22-inch AMG forged alloy wheels finished in a matte grey paint shade with a shiny rim flange. Under the fuel filler door, the filler cap is finished in matte silver with an ‘AMG’ logo.

In contrast to the exterior that’s largely identical to the stock G 63 SUV, the red-black interiors are more eye-catching. The black AMG velour floor mats feature ‘Edition 55’ lettering with red stitching. You can find a ‘55’ logo on the Dinamica steering cover, too. The nappa leather seats have a two-tone red-black colour, and several interior trim bits are made of carbon fibre.

In addition, the door sills are stainless steel with an illuminated AMG logo in red. You’ll even get an AMG indoor car cover with an inner lining made of soft flannel.

The special-edition G-wagen is mechanically unchanged. It’s powered by a 4-litre twin-turbo V8 engine that churns out 585PS and 850Nm, paired with a 9-speed automatic transmission. For off-roading, it has a 4Matic all-wheel-drive (AWD) system with a 40:60 front-rear power split. It also gets three differential locks, adjustable suspension dampers and an independent double-wishbone suspension at the front.

Mercedes’ AMG division was started in 1967 by two German engineers, Hans Aufrecht and Erhard Melcher. In fact, ‘AMG’ stands for Aufrecht, Melcher and Grossaspach; Aufrecht’s birth town. The company started operations as an engine modifier for Mercedes in a town near Stuttgart, and later shifted to its current home Affalterbach in 1976.

In the near future, Mercedes-AMG will continue to work on performance variants of the carmaker’s electric vehicles (EVs). A new ground-up AMG.EA performance electric vehicle platform has been developed by the performance arm, but it’s unclear when we’ll get to see the first independent AMG EV.

Speaking of electric, the G-Class is expected to arrive with an all-electric powertrain sometime in 2024. It’ll be underpinned by a ladder-frame chassis, with independent motors at each of its four wheels. The carmaker has confirmed that it’ll get an AMG variant.

You can get the AMG Edition 55 as an equipment package on the top-spec Mercedes-AMG G-Class. It adds the equivalent of Rs 15 lakh to the price of the SUV that retails for Rs 2.45 crore (ex-showroom) in India.

All Comparisons of G-Class