Very little details have been spilled, but from the looks of it, the EV shares design touches with the Compass and Renegade 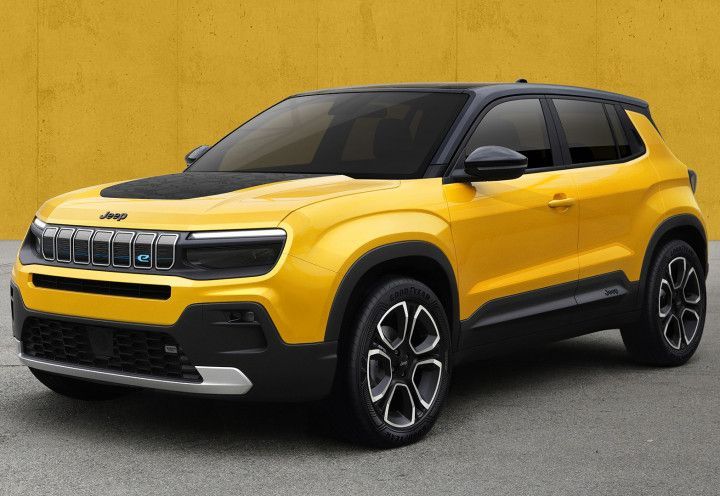 Jeep has teased its first-ever all-electric SUV concept ahead of its early 2023 debut. Now, the press release was super light, with just two pictures and a launch time frame. So, we’ll try to squeeze out as many details as possible to keep it interesting.

Starting with the design, which, in this author’s opinion, seems to share a mix of Renegade and Compass. Jeep’s familiar 7-slat grille is present, but they have been closed off as seen in the Compass, which should aid in better aero. The grille bleeds to the split-LED headlight, below which is an aggressively styled bumper. A bulged up hood adds to the macho stance.

In profile, the SUV gets large chunky squared-off wheel arches, which are nicely filled by these funky dual-tone alloy wheels. Meanwhile, the rake of the A-pillar and the glass area is once again very similar to the Compass. But, Jeep seems to have kept the rear door handle out of view to give it a three-door look. Whether this will make it to production or not is something we’ll know later.

At the rear, the square LED tail lamps with X-like detailing recollects you to Jeep’s smaller SUV, the Renegade. A chunky rear bumper with a silver skid plate rounds off the overall design. What adds to the overall character of this concept is its bright yellow finish.

Now, Jeep is yet to give us a glimpse of its interior or technical specifications. But, we suspect it could be based on one of Stellantis’ STLA platforms, which will be shared with its group offerings like Citroen and Peugeot. More details will follow once we get closer to its launch timeline.

In India, Jeep is preparing to launch the Compass-based Meridian three-row SUV and the locally assembled Grand Cherokee for 2022. The company has not announced any plans for EVs in India as of now.