Tata Punch vs Altroz: Which Tata Is More Dynamically Polished? 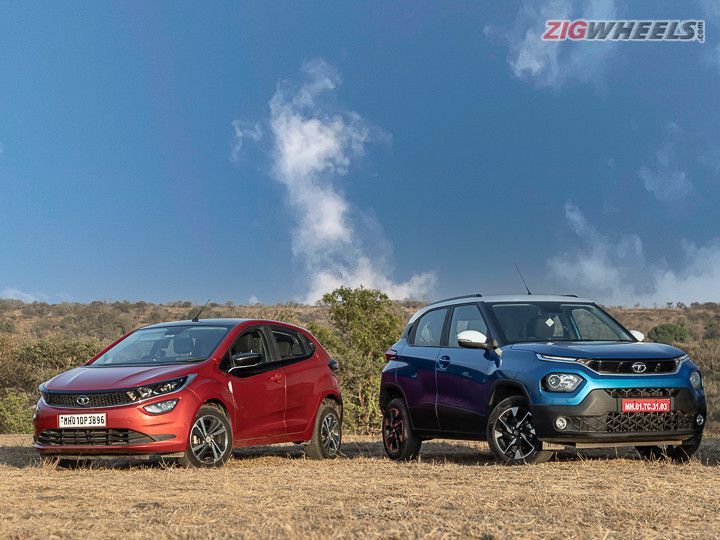 The Tata Punch has to be benchmarked; But since it has created a segment of its own, there is no better model than the Altroz – a Tata stablemate, no less – to pitch it against. Besides, the fact that they are both based on the same ALFA-arc platform and are quite closely priced makes them perfect candidates for a family feud. The question we will be answering in this report is which Tata is the more dynamically accomplished model, and which one is for whom; and to find that out, we compare them on three different aspects:

The first drill is simple. We take two runs at 80kmph and 100kmph respectively and slam on the brakes until the car comes to a standstill. The car that stops in the shortest distance wins. Both models rely on disc brakes at the front and drums at the rear.

Here’s how it went:

Phew! This one was close. In the 80kmph run, the Altroz came to a halt a wee bit earlier than the Punch. But when things heated up in the second round, surprisingly, both the Tatas stopped bang on in 43.21 metres. A good reassuring feel from the brake pedal means even a newbie can easily modulate it.

Since the Altroz beat the Punch, the hatch wins this test fair and square.

Cones set up, we get behind the wheel of the Punch for its first run at 60kmph. Since we’re doing this course for the first time in the Punch, we take things easy. At 60kmph, the Punch goes through the corner without knocking the cones, but we could notice the front wheels already sliding.

So what happens when we take things up a notch to 65kmph?  Three, two, one… Go. We start accelerating to 65kmph, and turn into the corner, and things start to get a little bit hair-rising. As understeer starts taking control of the car, the Punch’s front wheels start to slide, and the micro SUV starts to turn wide, hitting two cones in the process.

In stark contrast, the Altroz, which sits wider and lower than the Punch, manages to keep things tidy at 65kmph, despite having a little bit of body roll. It’s evident that the hatchback can hold on at faster speeds, so we decided to take a second run at 70kmph. In the second run, the Altroz runs a little bit wide as understeer kicks in and hits a cone in the process. But it did feel safer and more predictable than the Punch.

So the Altroz wins the second test as it’s more stable while cornering.

Let me make one point clear: both cars have an incredible ride and handling package. But, there are mild differences. The Altroz’ suspension is slightly softer, and as a result more pliant. Meanwhile, the Punch has a slightly stiffer suspension setup. Drive them back to back, and the minute differences are noticeable.

You just feel a wee bit more of the road in the Punch as you’re traversing over an uneven patch of road and potholes. There is also a bit of side-to-side body movement in the cabin as you’re travelling over broken roads or expansion joints. But there is a solution for it: drive a bit faster than usual and the Punch settles down into a nice rhythm.

The Tata Altroz’ ride quality is so pliant that it feels like a nice cushioned mattress over any road surface. The suspension settles down quickly, and the Altroz gobbles potholes and craters for lunch. Moreover, this doesn’t come at the cost of handling, as the stiff chassis has allowed Tata to soften the suspension, achieving a perfect balance between ride and handling.

And the best part is that the Altroz is not afraid of tackling a rough patch of road. The softer suspension means you have to take roads similar to rally courses at slower speeds as it bounces around, though not to keep you uncomfortable. One thing, though. You have to exercise caution with the slightly longer front overhang which tends to scrape when the suspension sags down.

No such problems in the Punch, though, as the ground clearance is aplenty. You can also drive it slightly faster than usual over bad roads, as the stiffer suspension keeps body control in check and you don’t have to worry about bottoming out. So if you’re someone who is going to traverse over bad roads frequently, this is the car you need to be looking at.

The Punch, with its lighter steering and tighter proportions, feels a bit easier to squeeze through traffic. The higher SUV-like seating position will also be appreciated and a good glass area means overall visibility is better. An optional AMT transmission also makes life easier in traffic, but we wish it was a bit more quicker shifting when you need that sudden burst of acceleration.

Speaking of which, the Altroz gets a manual gearbox only, and that is a downer for a handful who want an automatic, especially if you’ll be using it in the city. But would you miss an automatic transmission in the Altroz? Not really. Sure, its wider width means negotiating through traffic needs care, but the controls are light and it still feels easy to drive in town.

And the flip side is the availability of more powerful turbo-petrol and diesel powertrains which are much faster and potent on the open road. The Punch and Altroz’ 86PS 1.2-litre naturally aspirated petrol engine does the job when you drive them sedately, but demand more from them, and performance is clearly lacking.

We want to keep things fair and square, so we will be comparing the prices of the Altroz’ 1.2-litre naturally aspirated petrol manual variants with the Punch, as that is the only engine option in the micro SUV.

The lower-spec variants of the Punch are much cheaper than the Altroz’ equivalent trim. But if you’re comparing them vis-a-vis top-spec trims only, the Altroz is slightly more affordable.

Which One Should You Pick?

The Altroz pips the Punch when it comes to ride and handling manners. That said, the Punch isn’t all that bad. It’s just that while cornering, you need to take it with a bit less enthusiasm.

But the Punch, with its tinier proportions, lighter steering wheel, and better visibility, makes it the better city slicker. The availability of an AMT also gives it an upper hand over the Altroz, and should appeal if you want the convenience of an automatic. Also, the SUV’s higher ground clearance means those extra centimetres would come useful if you are traversing bad roads quite frequently.

The Altroz, on the other hand, is the one to pick if you love driving. The ride and handling package is spot on and the Altroz won’t complain if you chuck it hard in a corner. You can also exploit the chassis’ potential by opting for the more powerful 110PS 1.2-litre turbo-petrol and 90PS 1.5-litre diesel engines, which should keep the enthusiast happy.

All Comparisons of Punch

Thanks for your vote

people have voted till now.
Login to See Results

Thank you for your response

Here is how others have voted