Honda CB650R Review: All Chill And No Thrill?

Just an eye-candy or is there more to the CeeBee than what meets the eye? 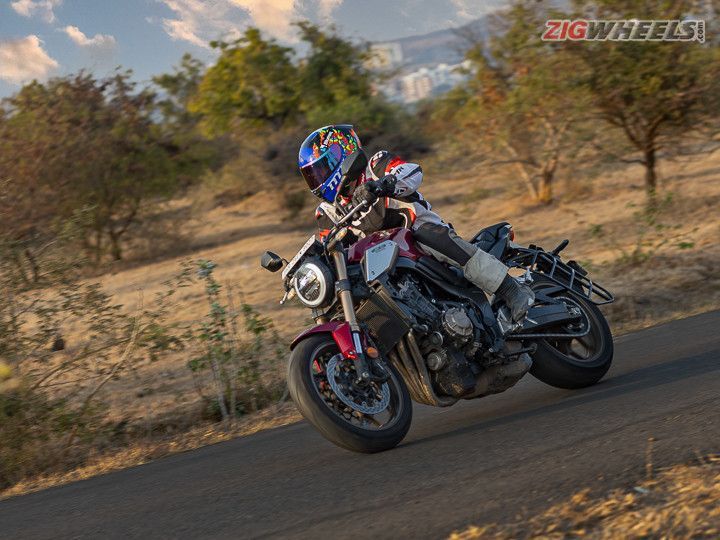 Us automotive journalists are a rather privileged lot, aren’t we? Sometimes, we head to work on a spindly little scooter, and ride back home astride an inline-four beauty (God, I love my job!). That also means more often than not, we get to experience motorcycles that otherwise wouldn’t have made it to our garages.

So, when I was handed the key to the Honda CB650R, my joy knew no bounds. As much as I admired the Candy Red paint, the shiny quad exhaust headers and the clean design in the pictures, I knew I wouldn’t be spending Rs 8.67 lakh (ex-showroom Delhi) on this. But thankfully, this time around, I don’t have to worry about that. I was told to just purely enjoy the experience, potter around town, take it for a spin in the twisties and let the Japanese inline-four screamer loose.

Firstly, the CB650R looked just as ravishing in the flesh as it did in the pictures. Like high-end jewellery on a gorgeous lady, the bronze and gold parts of the CB accentuate its sexy looks. The headlight unit seemed like a time machine, a gaze at the time, circular design throws you back to the ‘70s– the era of the OGs, but LED illumination, the DRL and the heat sinks surrounding the unit snap you back.

I wouldn’t mind simply having this CeeBee in my living room, and have countless conversations on its timeless design. And I wasn’t the only one obsessing over its simple-yet-sophisticated looks. All through the days I spent with the CB650R, people sheepishly creeped and enquired about the bike, and were left dumbfounded by this puny bike’s price.

Yes, the Honda CB650R is deceptively small. In fact, in its side profile, from afar, you’d be hard-pressed to distinguish it from the CB300R. But enough of the ogling, it was time to hear that inline-four symphony.

Once astride, you do get a sense of being on a big bike, thanks to the wide 15.4-litre fuel tank. The handlebar is flat and wide, the pegs rear-set , giving a commanding position. And the moment I thumbed the starter, I had a wide smile plastered across my face. The 648.2cc liquid-cooled inline-four felt like an introduction to a Zack Hemsey soundtrack. And if you have heard his songs, you’d know that his music transforms from a melody that your grandma would hum along to something you could pump iron on.

And that’s exactly what I was expecting when I gunned the throttle. I expected the sweet symphony to transform into a head-banging track, but was a tad disappointed. No, not because of the aural experience, but because it didn’t match the speed I was carrying. The 87PS peaks at 12,000rpm, but the surge is felt only beyond 8000rpm. So even with the throttle fully pinned, you have enough time to brace yourself for the speeds you are about to encounter… and even then you’ll be left lusting for more speed. Oh, but the moody traction control will always have you on the edge (Pro tip: Turn it off EVERYTIME).

But perhaps I was mistaken. It wasn’t supposed to be a Zack Hemsey soundtrack, but perhaps more like a Japanese lo-fi song, going easy throughout. With that thought, I headed back to the city, to see if that’s where the CeeBee’s heart is.

Just as like any lo-fi track, the intro settles you well for the sensory pleasures, but with the CeeBee, those aren’t in a way you’d expect. For long, songs have been sung about the refinement and quality of the Japanese machines, and with this 650, it was disappointing. Even at revs as low as 5000rpm, the vibrations creep in from the seat, tank and pegs.

It is well mannered in the city, allowing me to continue at speeds as low as 35-40kmph in 5th gear. But when I gave it the beans, it felt dull. That’s because the 58Nm torque peaks at 8500rpm, so the lacklustre bottom-end performance is another putoff.

All the while, when I could have enjoyed the slick six-speed gearbox, its ability to calm a new rider and help him/her wade through chock-a-block traffic with the light clutch action were spent crying over its engine. Maybe that wasn’t how it's supposed to be done. Maybe I have been looking at the wrong playlist? With that thought, I darted off out of the city, to catch the sunset and understand this motorcycle better.

The time spent with the CB650R made me all the more confident with the bike, and I was ready to attack corners. Its 206kg heft is relatively easy to move around, but as you grow confident with each corner, you also realise the limit of the Dunlop Sportmax tyres. The pliable suspension holds ground around the corners. Even the braking performance is on point and dropping the anchor hard at even 120kmph, it slowed without breaking a sweat. But the tyres coupled with the temperamental traction control made up for a rush I wasn’t prepared for.

The Honda CB650R isn’t about chasing numbers and it certainly doesn’t appease tech-savvy riders too (no ride-by-wire, riding modes, adjustable suspension), and even then there’s a steep price to pay for. But even keeping that aside, it fails to entice and establish a connection. And if it's the aesthetics that appeal to you, the Kawasaki Z650RS is one motorcycle you ought to have on your radar.