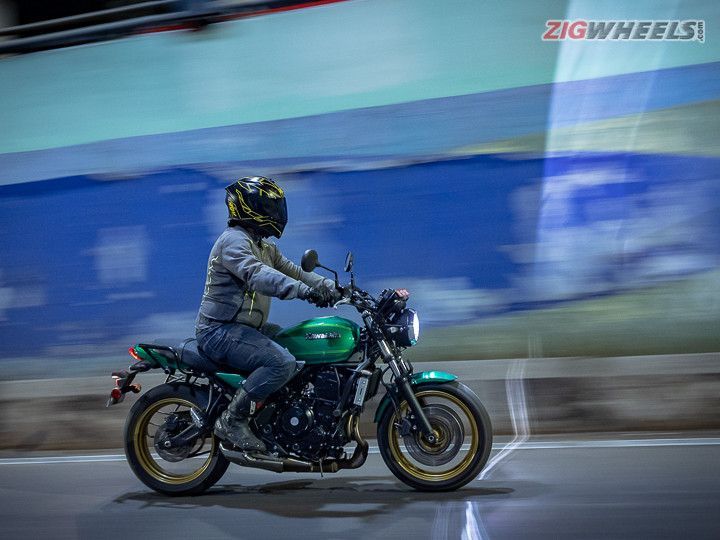 4:00am. My alarm blares loudly. But I am already stirred up and awake. Not because I was having trouble sleeping. But we had to catch the first rays of the morning sun at Lavasa for a chilled video shoot. The hero of the video was the Kawasaki Z650RS, and truly, it is a proper superstar. This shoot wasn’t something standard or regular. It was something fancy, something light and easy, something that just glorified the bike and not really show my ugly mug on screen.

I have a cuppa of coffee, gear up and thumb the starter. The 649cc parallel-twin motor rumbles to life calmly. Being a good neighbour (and fearing my landlord kicking me out), I rolled away as silently as I could. The RS obliged. We hit the highway and I immediately find myself in a sweet zone, which Indian audiences have adored so much about this motor. We pass the city, switch onto the country road, zip through the village and I arrive at the foothills of Mutha ghat.

My colleagues ring me up. Knowing their coordinates, I suggest we meet directly at the tapri at the base of Lavasa. This would give them enough time to reach before the big ball of fire lights up the sky and also for me to get a small joyride out of the way.

I have ridden this course countless times and on varied motorcycles. Some fast, some not so fast. This one felt a bit different. Yes, the Z650RS is a fast bike. And yet, I never felt the need to go bazinga. Maybe it was the way I sat on the bike with my chest flared and shoulders out, rather in a macho stance. Or maybe it was that my legs were nice and relaxed, hugging the nicely shaped teardrop fuel tank. Or maybe it was the flat seat with plush foam.

I didn’t pay much attention then because the chill of the early February morning was starting to get to me a bit. Like a fool, I forgot my thermal jacket liner. With clenched teeth, I rode through the horrendous stretch of road that had been dug up by the roadworks and left in an appalling state. And yet, despite my few jittery inputs (I blame the winter), the Z650RS never flinched once. It was as though the road my eyes were watching and the one my body was experiencing was completely different. So Kawasaki clearly has tinkered a bit with the suspension, making the rear a bit softer on the RS.

What was even more effortless here was that I was barely shifting cogs. It did nearly the entire stretch in sixth with the speeds not going above 55kmph at any moment. I was in zen mode.

I reached the tapri just around the same time the owner was opening it up. I had made so much time on my colleagues, that a couple of hot cups of chai were definitely the need of the hour. Not only did it provide the necessary warmth that I needed but also gave me a chance to enjoy the bike, and soak in its coolness.

Kawasaki did outdo itself here. The Candy Emerald Green shade never looked so fancy on any other Kwacker. It makes you go gaga, leaving you spellbound with its uber cool dapper look. It gets lots of the styling elements right. The ‘Kawasaki’ 3D logo is just straight out of the old Z650-B1 from the 1970s. It might not have oodles of chrome like the B1 but the bling here is sponsored by the golden faux spoke alloy wheels. There’s a subtle green-green-yellow pinstripe on the tank, which is so elegantly and neatly done. I couldn’t just take my eyes off the whole bike.

The crew arrived just as the grey in the sky started getting lighter. We sped up to the flat piece of land where my video guy could start to work his magic. And as the few rays of the sun began falling on the tank, the metal flakes sparkled and made the bike look even more delectable.

Our plan was to not waste a lot of time shooting intricate details of the bike. Shoot the absolutely necessary stuff and get on with the action. What we didn’t realise is that all of us on the shoot started becoming shutterbugs, wanting to get a unique shot of the bike that the other person didn’t think. Just before it would snowball and the lighting became harsh, we snapped out of it and everyone assumed their roles.

With every cornering shot, the easy going nature of the Z650RS was becoming apparent, creeping up a gentle smile in the helmet. Take it easy and this Kwacker was going through the twists and turns with a nice flow. It didn’t like it when I was attacking the corner. It was as though the bike was telling me, “Hey, you take it easy, mister.” I had to remind myself that even though the recipe of the RS was virtually the same as the standard Z650, the flavour and taste profile were completely different.

However, one thing that put a slight damper was the tyres. The Dunlops simply failed to inspire any form of confidence while cornering, feeling squirmy on most occasions. A slightly grippier pair of shoes would be the first upgrade that the bike needs.

Ultimately, as we were wrapping up the shoot, I was feeling a bit sad because my time with the RS was nearing an end. It managed to leave quite a lasting impression, one that certainly makes it rank higher than its standard edition in my books. Kawasaki has nailed the retro brief with the Z650RS, not only with its uber cool looks but also its sweet handling.

It might cost Rs 48,000 more than the regular bike and justifying this premium is a bit tricky. However, if I had to put down the money for either, it would be for the RS because it has so much more character. It provides a far more emotional connection to the rider than the stock Z650 ever could. And if it is a first big bike for you, then you might just end up enjoying it quite a bit.

All Comparisons of Z650RS