Can the Kratos spark the Ather moment for electric motorcycles in India? 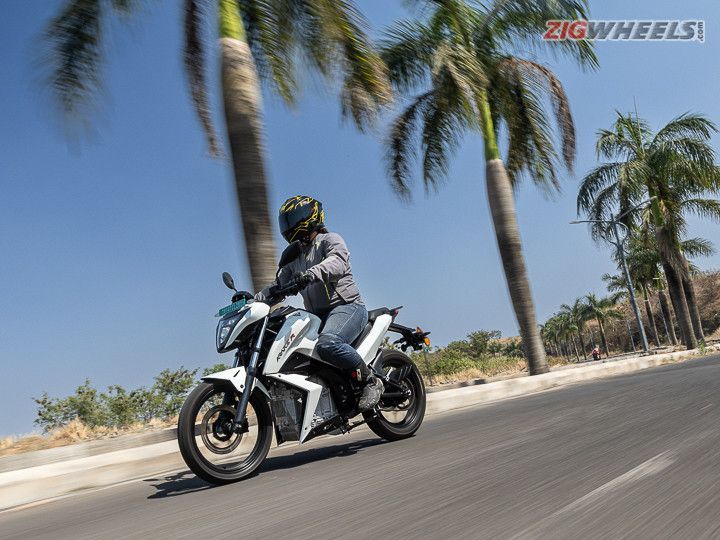 The Indian two-wheeler EV space is flooded with scooters of all varieties. However, if you, like most of us at the office, have been asking, “Where are the motorcycles?” We agree. Our experience so far hasn’t been entirely enjoyable (*cough*Kabira*cough*). The space is begging for a desi touch. And that’s what happened earlier this year when Tork Motors finally launched its first electric motorcycle: the Kratos. We’ve managed to get astride the more powerful ‘R’ variant for a few hours. So, does the Tork Kratos R manage to replicate the Ather moment for electric motorcycles in India?

Striking Design
There’s hardly a soul who would disagree with us when we say that the Kratos is one of the more stunning looking motorcycles in the market, electric or ICE. Its edgy design does have a nice sense of flow, with the body panels making it seem like it is one complete unit from front to back, when in fact it isn’t. There are hints of the TVS Apache, Honda Hornet, and Bajaj Pulsar here and there, but all in all, the Kratos strikes the right tone of an aspirational and yet accessible motorcycle.

Feels Quite Natural
Naturally, this being a motorcycle, it lends a far greater sense of control to the rider. In that regard, the Kratos has spot on ergonomics, finding the right balance between a sporty naked and a pure commuter motorcycle. There’s ample leverage on offer, courtesy the wide bars. Shorter riders will appreciate just how easy it is to hop on to the bike (785mm seat height) and comfortably find their footing. With the mid-set mounted footpegs, the rider’s lower body posture is relaxed, not cramped anyhow. Plus, the seating area is quite spacious for even larger riders to move around in the saddle and find their sweet riding spot.

At 140kg, the Kratos R is surely heavier than most electric scooters in the market. But unlike e-scooters with hub motors, moving the Kratos doesn’t require much effort. Usually on a scooter with a hub motor, there is some resistance offered by the motor and its gears, which isn’t quite the case with the Kratos. And this setup does have a positive impact on the handling, which we shall get to soon.

Tork prides itself on making its own electric motors with the one on the Kratos R being one of the most powerful units ever fitted to an Indian electric motorcycle. So, it should be quite quick, right?

Well, not quite. Unlike spirited premium EVs that we’ve ridden so far like the Ather 450X and the Ola S1, the Kratos R doesn’t shoot off the line. It sets off smoothly and only post 20-25kmph does it gather pace rapidly, reaching speeds of 70-75kmph quite easily. On our short test ride we only managed a top speed of 85kmph (speedo-indicated) as there simply wasn’t enough road left for us to push the bike further.

While it cruises along nicely, what was becoming a recurring issue was the safeguards put in place to protect the motor from overheating. The thermal management system intervened far too soon and slowly began dialling down the performance of the bike before shutting shop entirely. At this point, we were forced to let the motor cool down, which, in 40-degree baking heat, wasn’t rather pleasant. You do get a small temperature gauge on the dash, letting you know exactly how hot the motor is running, with the management system accordingly reducing the current supplied to the motor. Agreed, we were riding on some pretty steep terrain repeatedly which puts extra strain on the motor and its management systems, but this wasn’t an issue that we’ve felt on the Ather 450X. This issue is something that Tork needs to rectify almost immediately before the delivery of the bike commences in a month or two.

On the Kratos R, you get a pretty decent 4kWh battery pack, which allows you to ride for 120km in Eco mode without needing a charge. In most power packed Sports mode, it does 70km only, which should be okay for most city commutes.

The Kratos R does have fast charging capabilities with Tork’s own T-Net charging infrastructure arriving in multiple cities shortly. But having the battery position right at the heart of the motorcycle does have its advantages. Tork was able to design the chassis around it, using the battery as a stressed member and the result is…

A Confident Handler
Tork’s racing pedigree has trickled down rather nicely onto the Kratos. The split trellis frame inspires great cornering confidence, with the taut suspension making sure the ride remains controlled and settled and the rider confident when hunting down apexes.

This tautness does have a negative impact on the ride quality. The rider certainly feels the road surface, especially when going over broken stretches of road, and the initial sharp thud is felt from the monoshock.

Braking inconsistencies were also observed on the Kratos R. On one unit, when you hit the front brakes hard, the bike veers to one side and then the other. This wasn’t an issue on another unit that we also tested, though. The rear brakes were a bit sharp but not too much to induce slides.

Not Smart And Fancy Enough

The Tork Kratos R isn’t a cheap bike. At Rs 1.47 lakh (ex-showroom India, FAME-2 subsidies included), it commands quite a substantial premium over the Revolt RV400, and the performance capabilities justify the difference well. However, for the money, there are electric scooters that offer quite a lot more features and seem to be better put together as well. The mounting of the front turn indicators is a bit shabby, the tank plastic panel was rattling a bit and the switches felt quite meh in contrast to the rest of the bike.

Also, the digital dash seems a tad too simple. In the age of colour TFT screens, the simple monochrome LCD unit of the Kratos feels dated. Even in terms of smart features, it is offering the basics. We couldn’t test the Track mode and its smartphone functionality here on the test ride, but Tork assures us that it will be ready when we get the bike for a road test later this year.

Creates The Ather Moment?
Not quite yet. Everything on the Ather 450, and subsequently the 450X, felt right from the start, nothing serious that needed a fix. The same cannot be said for the Kratos R. From what we experienced while riding, there is potentially a great product that needs to be ironed out, especially it's thermal management and maybe even the fit and finish levels. The motor's nice mannerisms will grow on you, and you will like it's riding dynamics. But as it stands now, we will stay away from recommending it just as yet, hoping that Tork gets all of it right by the time the final product gets ready for delivery, which should be in another month or two. Now, we've waited for eons for the right product from Tork, waiting another two months should hopefully not be an issue, right?

All Comparisons of Kratos